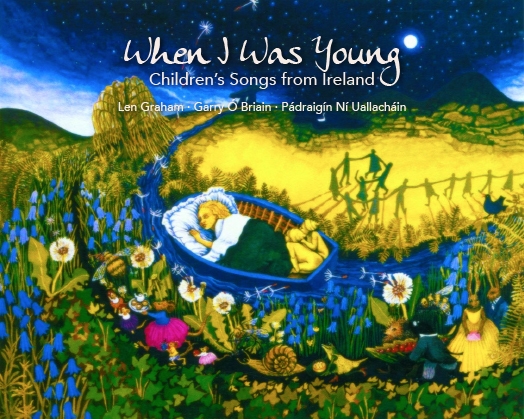 This collection of 28 songs in English come from childhood memory of the musicians. Classic street playing songs and rhymes are sung with enjoyment and ease alongside a number of beautiful new compositions. The album is packages with a 36-page booklet with lyrics and song backgrounds.

From time to time prominent performers with a belief that their music is accessible to both adults and children will venture into the uncharted tundra that is the world of childhood. Donovan, at the height of his career, produced a splendid rendering of early 20th century children's poetry with the landmark album "HMS Donovan", now widely sought after as a collectors' item. Robin Williamson of The Incredible String Band wrote several rhymes for children that he was able to include on ISB albums. He too produced a full collection in the shape of "Songs for Children" which introduced both original works and songs from the tradition.

To complete this unintentional trilogy comes "When I Was Young", a unique, enthralling and satisfying collection of Irish songs for children. Though children the land over, whether they live in Dublin or Derby, Dundalk or Dundee, are sure to enjoy the universal idiosyncratic views of life encapsulated in some of the songs.

A few years ago Padraigin Ni Uallachain released a comprehensive collections of children's songs in the Irish language "A Stor 'S A Stoirin" which was greeted with great acclaim. The "When I Was Young" album is its sister anthology which, though having a similar charm, tends to collect street songs, playground rhymes, home-songs, nonsense rhymes and other pieces mainly from a more urban culture - but then, that's been the way of the world over the past 100 years or so and it's bound to be reflected in children's songs as much as it is in adult songs.

What is intriguing about the presentation of this specialised field of work is how tradition bearers such as these can distil the innocence, magic and spontaneity of simple melody and enigmatic, Chinese-whispered lyric to a potency that strikes deep in the memory bank. The album offers a balanced repertoire of such timeless songs as "Rosemary Fair", "The Wheel of Fortune", "I Once Had a Granny", I Know Where I'm Going", "The False Knight", "As I Roved Out" and many other songs mended, braced or re-shaped by Len and Padraigin. Many fine musicians such as Nollaig Casey, Mairtin O'Connor, Ronan Browne and Tommy Hayes supply the highest standard of accompaniment and as usual Garry O Briain adds the musical light and shade in his seamless arrangements and playing.

Children will certainly identify with many of the sentiments expressed in these songs: they will not only identify with the strong messages of hope, but with some of the darker tones inherent in some of the lyrics (for example what better way to introduce children to the concept of mortality than through traditional song or fairy-story?)

The songs we learn in childhood nestle deep in the subconscious and often they catch us unawares later in life. The three artistes behind this project are to be entrusted for their sound knowledge of the genre and for their unquestioned sincerity in wishing to breath life into these powerful songs. They have also taken the pulse of contemporary childhood and have found it beating as vigorously and as erratically as ever - hence the intense, often unintelligible lyrics in their songs! "When I Was Young" is an album of today that celebrates a patch of living history that is the province of children; in truth we adults are privileged to gain entry.