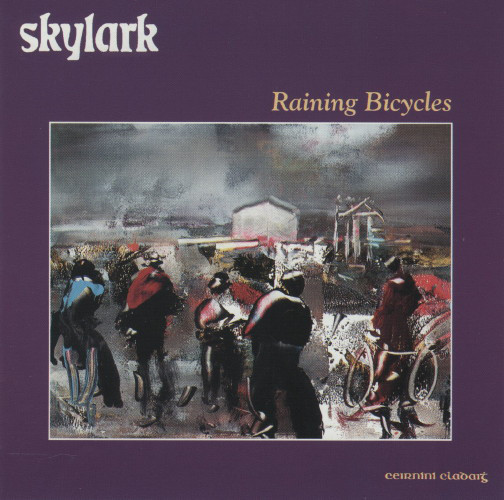 Admirers of the superlative instrumental talents of accordionist Mairtin O'Connor, fiddler Gerry O'Connor and multi-instrumentalist Garry O Briain, or of the unique singing skills of Len Graham, will welcome this latest offering from Skylark.

I, however, am having a problem "taking to" most of the album; not because it is bad; on the contrary I'm finding it a bit "too perfect". Only a few tracks, over several playings, did the performers convince me that they were "right into" the music: that they were really enjoying the process of playing. Don't get me wrong; these guys are some of the best Irish musicians you'll ever come across; their playing is faultless: for variety their choice of tunes and songs you can't criticise: their arrangements are extremely well-considered and presented. But I can't get away from the idea that the band were "doing a good day's work" rather than getting on with enjoying the music.

There are, however, exceptions; in the form of a great set of jigs; "Julia McMahons's" and "My Former Wife", the song which follows it; Padraigin Ni Uallachian's song of parting "Echoes on the Wind" and the beautiful emigration song "Bound for Castle Garden".

In these three tracks I found the otherwise rare ingredient in abundance. The jigs are both interesting tunes in themselves; the accordion and fiddle combine beautifully and are carried on the syncopated piano accompaniment. There is added contrast in the second tune with the addition of some good banjo playing.

"Echoes of the Wind" is, I guess, a fairly recent composition by Len's with Padraigin. It is well arranged, with acoustic instruments augmented by an atmospheric electronic effect which in no way distracts from a traditional feel in this moving parting song.

I have long been an admirer of Len's singing and I find his version of "Bound for Castle Garden" a classic example of this great song collector and performer in fine voice. His contrast, both of shade and pace, adds a powerful sense of feeling to this song balanced "on the knife-edge" between sadness of leaving home and hope for the unknown future.

This record is undoubtedly one first for the listener who appreciates the detail of perfect performance, technically flawless instrumental playing and subtlety in arrangement, and secondly (of course) for the many fans of Skylark.