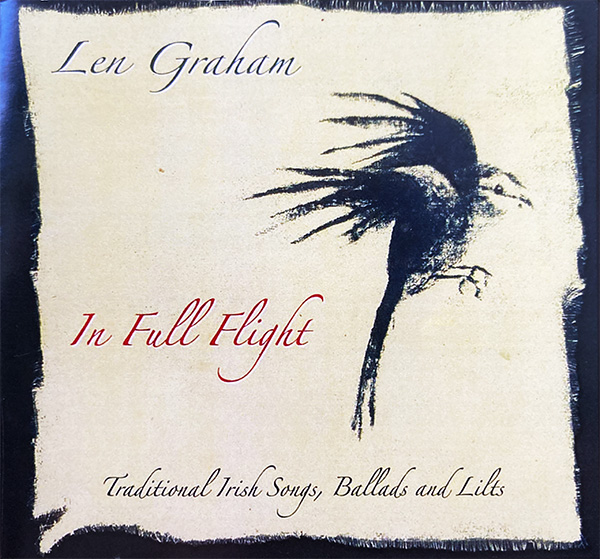 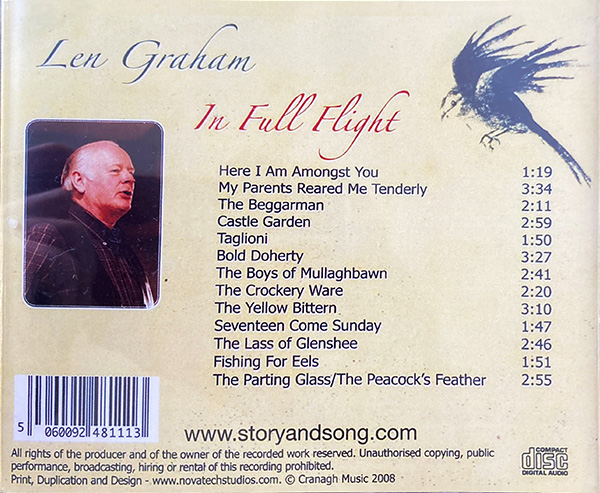 Len Graham as a collector and singer of over 40 years has gained an international reputation not only for his inimitable singing style, but also for the breadth of his knowledge of Irish folk music. In 2002 he was the first recipient of the national TG4 Gradam Ceoil award for ‘Traditional Singer of the Year’ and in 2008 he was awarded ‘Keeper of the Tradition’ from the Tommy Makem Festival of Traditional Song.

Praise for ‘In Full Flight’.

Len Graham of Glenarm, Co. Antrim has spent a lifetime on an ongoing 'song journey' as a collector and singer who, in turn has become a source singer for many Irish singers/groups. His long associations and friendships, made on this journey, with singers of the calibre of Joe Holmes and Eddie Butcher are all reflected here.

The thirteen unaccompanied traditional songs, ballads and lilts were recorded live in April 2008 in St Pauls, Minnesota and all are linked by Len's engaging commentary. His warmth and depth of tone, musicality, crystal clear diction and expressive delivery all come across with a remarkable presence and immediacy. This is technically and aesthetically a highly satisfying performance package. We have My Parents Reared Me Tenderly a song from the Crimean war period via Joe Holmes and a lively and finely paced The Beggarman (Child 279) also from Joe. Then again we have, what has become one of Len's trademark songs, The Boys of Mullaghbawn, a transportation song and 'one of the few in the Irish tradition that praises the landlord'.

A particular favourite of mine, which survives well in Scotland, Ireland and North America, is The Lass of Glenshee originally from the pen of Perth shoemaker, Andrew Sharp, written in 1817. The songs range in mood and character from the comic to the tragic and the album closes, appropriately, with a lovely version of The Parting Glass. This is song and singing of the highest order.