This ‘Here I Am Amongst You’ CD is a sampler from the repertoire of one of the most influential singers and traditional fiddle players in Ireland – Joe Holmes (1906-78) of Co. Antrim.

A book of this title has been published by Four Courts Press, Dublin with some eighty songs of love, politics, early classic ballads, songs of emigration and of local interest, along with fifty dance tunes ranging from mazurkas, polkas, schottisches, quadrilles, lancers, hornpipes to jig and reels, which all appear with music transcriptions, reflecting the varied influences and traditions of the north of Ireland.

“My first memory of hearing Joe Holmes and Len Graham sing at Éigse na Trionóide, TCD., Dublin in 1970 I think it was – I can still hear the sound in my memory and I still can vividly recall the sense of awe and wonder I felt in the presence of that musical relationship, not only because of the deep beauty of the sound but also because it was a beautifully clear expression of the transmission of tradition in progress in the most public of arenas.”
Professor Mícheál Ó Súilleabháin (University of Limerick)

Photograph of Joe & Len by Joe Dowdall (Courtesy of ITMA)

Front cover painting ‘Farmhouse on a Hill’ by Normal Smyth 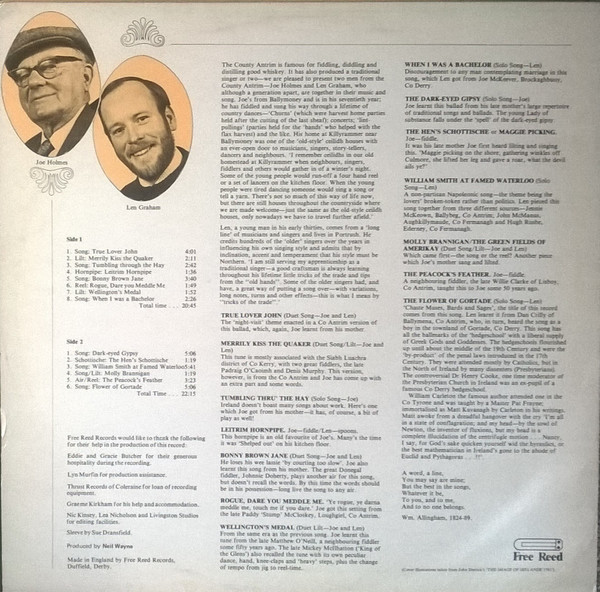